A season of loss, of grieving, and of deep struggle makes the time afterward sweet. But so does laughing and singing in the midst of that same period of loss, grieving, and struggle. Gospel songs and the blues express the powerful hope and lament in the Black and Afro Caribbean diaspora traditions, faced with the inhumane violence and oppression of slavery, of lynching, of entrenched discrimination in explicit and implicit forms. In my first visit to my parentland, the Philippines, more than two decades ago and in several subsequent visits, I encounter the deep love and joy of family and friends, the laughter of fellowship, in the midst of decades-long struggle out of political corruption, poverty, and basic human rights. Laughter, singing, and dreaming again happens in the aftermath of struggle and grieving, and it is delightful, even in the midst of it all. There is freedom, there is strength, there is power when hope’s embers keep burning.

Psalm 126 is in a group of psalms (Psalm 121 through Psalm 134) called songs of ascent. These lines were sung as exiles from the great Babylonian captivity made their return to Jerusalem. After many decades away from what was home, wondering and waiting when restoration would happen, the song of ascent expresses joy, laughter, freedom. Successive generations of pilgrims from various parts of Israel and Judah would travel many miles towards Jerusalem for worship and as they approached the city of David atop Mount Zion they would sojourn into the Kidron Valley at the outskirts of the city gate and ascend up from the valley where their eyes would behold the gates, just as the exiled Israelites did. Ascending from the valley towards the gate was expressive of the communal spirit and the individual heart being lifted up towards the Lord and the living God of hope, of steadfast love in the midst of imperial conquest, colonial occupation, and longing for the hope of the messianic age. A people silenced, a people subjugated are delivered by the Lord, a reality that now shines before them enables dreaming again, tears that were shed turn to shouts of joy, water that seemed not to flow in the Negeb are now flowing. Hope in the midst and hope afterward made real. 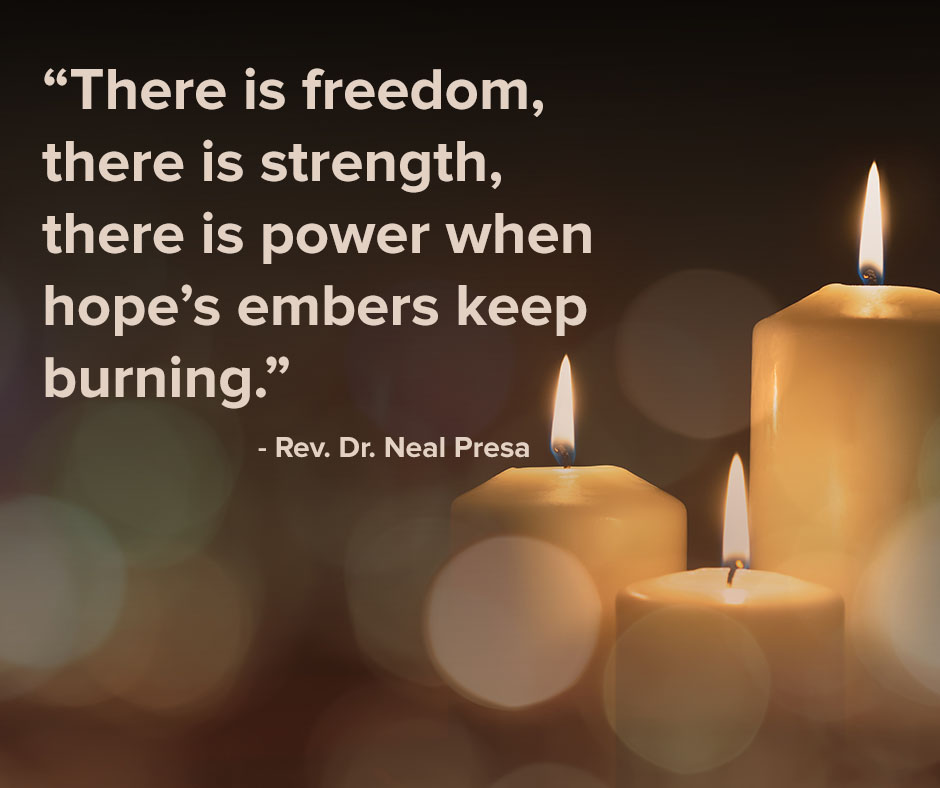 As Psalm 126 and the others songs of ascent directed the hearts and eyes of God’s people towards Mount Zion, towards the Temple, and, in there to the living God, the witness of the Gospel according to John and of John the Baptizer direct our attention to the “true light” (1:9), to “the one who is coming after me.” (1:27a) The priests were curious, as were so many others, if John the Baptizer was the one who would usher in the long-awaited messianic age. Where the psalmnody of ascents was moving from the valley to look up towards Mount Zion, John the Baptizer’s witness was to look to the One who is after me; in short, look behind me. When you look behind, you will see and receive the One who will be beside you, who will be with you, who will go in front of you, and who will lift you up.

As I write this preview, situated directly behind my chair is a placard our family made back in June with these words:

My eldest son, Daniel, and I ventured off to join hundreds of others in the aftermath of George Floyd’s death to call for reform in police practices and for justice for George Floyd. That was June. And the struggle continues.

Then, this evening, our youngest son as part of his high school assignment wrote this poem. I give credit to him, Andrew, for these words, words that are in front of me.

What happens to a voice silenced?

Does it cry with no end

And then decompose into the worldly manner we all were born from?

Does it taste bitter with resentment like burnt popcorn smoking in the microwave?

Or boil with intensity and bubble with fervor—

like lava in a volcano priming itself for the detrimental explosion?

like pandora’s box in its materialistic and deceiving beauty.

Or does it evaporate into vapor as quick as it came down to the earth?

The next generation speaking in the season of struggle.

Advent and the Lord of the Advent is speaking in the silence, in our grief, in our struggle, in our laughter, in our joy, in our waiting. Look behind. Look forward. Look upward. Whatever we do, let’s begin again.