‘Thinking about the most vulnerable’ guides church service decisions

Churches across the nation are evaluating if services should be held this weekend.

As the COVID-19 virus spreads, it’s a very real question that’s being handled differently in every area.

In response to a localized outbreak of confirmed COVID-19 infections and at least one church member death attributed to the disease last week, the Seattle Presbytery urged that “church sessions cancel large group gatherings, including Sunday morning worship” and make plans for virtual meetings when possible.

A March 10, 2020, update from co-Executive Presbyters Eliana Maxim and Scott Lumsden gave further guidelines to sessions and congregations in light of new findings, a rise in confirmed cases, and growing concerns among vulnerable populations.

The World Health Organization declared the spread of coronavirus a pandemic on Wednesday and Maxim and Lumsden are at the epicenter of the outbreak in the U.S. King County, in which Seattle and most of the presbytery’s churches are located, reported 234 confirmed cases and 26 deaths from the disease on March 11.

“There was some mild criticism of our recommendation to cancel services,” said Lumsden, noting that many people don’t relate to virtual church services the same as meeting in person. “But if you’re not in a location where you’re hearing from people who are affected, it may not seem as critical.”

“You may not be in a highly affected area right now, but that can change rapidly as we discovered,” added Maxim. “We spent two weeks consulting and planning for how to help congregations make these decisions about worship and meetings. Because of that, we’re able to mobilize and think strategically about how to move into addressing the community’s needs around travel, supplies, care and schools.”

The Rev. Dr. J. Herbert Nelson, II, Stated Clerk of the General Assembly of the Presbyterian Church (U.S.A.), reiterated these concerns in a Presbyterian News Service article this week, saying, “In this time of crisis, we are presented with a challenge that calls us to engage in deep prayer and commonsense protection against a virus that we are not able to contain at this time.

“[Congregation and their presbytery leaders] need to determine what is best for their community and the individuals who gather for worship.”

Seattle Presbytery leaders said 80-85 percent of churches have implemented or are more heavily promoting Sunday morning livestream options or recordings of services. Many sessions are meeting via conference call or video conference. Still more churches are utilizing online giving as they continue to serve needs of parishioners and those around them. 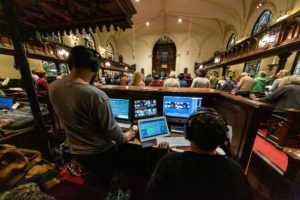 Churches that can harness these digital tools are in a unique position to assist the community around them, said, Robert Hay, Jr., the Presbyterian Foundation’s Senior Ministry Relations Officer for the Southeast.

“Prioritizing further, or setting up, the means to meet virtually is an important aspect of protecting our people at this time, but it’s easy to overlook that if people aren’t in church, they often aren’t giving,” he said. While streaming worship may entail additional technology and licensing for music, he said establishing online giving is an effective way to continue the church’s ministry even when services are held virtually.

“We’ve made it easy and quick to establish online giving with a minimum of hurdles for churches,” he said. The setup process at the Presbyterian Foundation takes only a few business days following the submission of an application and Hay noted it is the most cost-effective online giving platform available, including a mobile application and eliminating administrative overhead for church financial officers.

“If churches have been hesitant to implement online giving, this is an opportune time to implement it so they are able to maintain their cash flow and continue in ministry in a needed time,” Hay said.

Social distancing is loving your neighbor

Also following the guidance of Nelson, leaders in the Presbytery of Philadelphia have prepared information for their congregations which span a large geographic area of urban, rural and inner-city communities, hoping to mitigate the spread of the disease and the fear that accompanies it. While the region hasn’t seen a widespread outbreak, the presbytery has churches in four of the six region’s counties where confirmed cases have been reported.

“Leaders at the local level are the ones who know their people best, and they’re the ones who have to make the decisions about how to serve them,” said Rev. Ruth Faith Santana-Grace, Executive Presbyter of the Presbytery of Philadelphia. “They’re trying to navigate the frightening reality [of the virus spread’s unknown aspects] with common sense and caring for one another.”

While there is uncertainty about whether or not to hold the presbytery’s April meeting, Greg Klimovitz, Associate Presbyter of the Presbytery of Philadelphia, said an important aspect of their conversations include how to “counter some of the fear and anxiety that is real, but not dismissing it, especially in response to those who feel vulnerable.”

“Social distancing is an exercise in loving your neighbor,” he continued, saying modifying other church practices such as greeting, communion and giving are common-sense ways to keep people safe. “Some may say, ‘It’s not a big deal, I don’t feel sick.’ But it’s not about you – it’s a way to love our neighbor as ourselves. We need to think about the most vulnerable around us.”

Pastoral Statement on the Coronavirus / COVID-19

Gregg Brekke is an award-winning freelance writer, editor, photographer and videographer. Send comments on this article to Robyn Davis Sekula at robyn.sekula@presbyterianfoundation.org.