1 I am the true vine, and my Father is the vineyard keeper. 2 He removes any of my branches that don’t produce fruit, and he trims any branch that produces fruit so that it will produce even more fruit. 3 You are already trimmed because of the word I have spoken to you. 4 Remain in me, and I will remain in you. A branch can’t produce fruit by itself but must remain in the vine. Likewise, you can’t produce fruit unless you remain in me. 5 I am the vine; you are the branches. If you remain in me and I in you, then you will produce much fruit. Without me, you can’t do anything. – John 15:1-5 (Common English Bible)

Not much fruit grows in my small and shaded back yard. Sometimes I can coax a tomato or cucumber to bring fruit from the vine in the summertime, but by February, even such little bounty is a faded memory. Now is the time to prune, prepare, and persevere.

While I don’t have a vineyard to prune and keep, there are assorted roses along the driveway that sit dormant during these cold months. They were planted long before me and will remain long after I leave this house unless my brown thumb gets in the way.

Last year I forgot to prune the roses. Instead of dozens of dark pink or cream-yellow flowers in spring and summer, the flowers were fewer and smaller. The bushes sprouted pencil-thin branches that couldn’t hold the weight of what they did produce. Fungal outbreaks of blackspot and powdery mildew were widespread. One of the taller rose bushes, in a bid for freedom from the tangled mess, pushed upward into the tiles of an overhanging roof and tried to jab its way through. 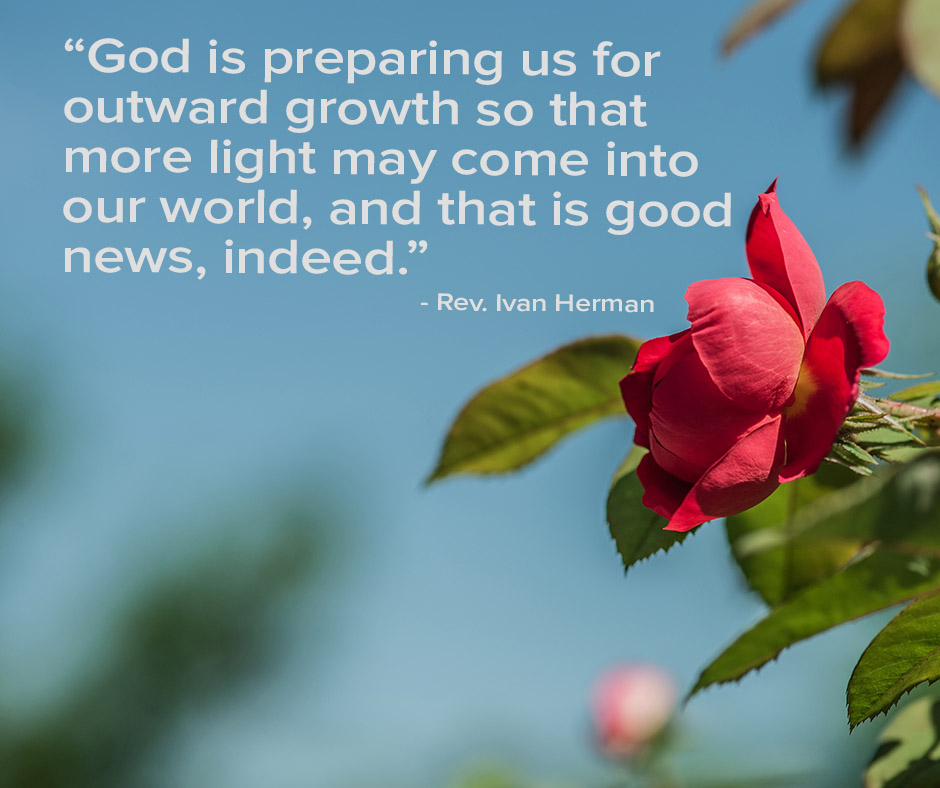 Jesus may not have grown hybrid tea roses but pruning in a vineyard is similar in many ways. Pruning rose canes and vineyard canes can improve the health and productivity of the plant if done well and at the right time. It is labor-intensive and must be done with care and intent to what future growth will look like. When pruning roses, diagonal cuts are made just above outward-facing buds so that new growth moves away from the center of the bush, where there is greater competition for space and light. Outward growth encourages increased airflow to reduce disease, and it lets in more light to the center for a healthier, more vigorous plant.

As I prune the roses this year, each snip of the shears makes me ponder how to make room for new, healthy growth in my life and in the church. During this long season of pandemic, many of our activities and collective spiritual practices have remained dormant, and some may never return. Even still, we remain in Christ, our true vine, and our God is laboring to trim branches. That doesn’t necessarily mean these haven’t produced fruit, but that they will produce more fruit. God is preparing us for outward growth so that more light may come into our world, and that is good news, indeed.

Ivan has served as associate pastor at Carmichael Presbyterian Church for more than a decade and now chairs the Council for the Presbytery of North Central California. He grew up in Ecuador and Colombia and was over-educated in schools on the East Coast. He previously served as pastor or ruling elder in Presbyterian congregations in Memphis, TN, Washington, DC, and San Antonio, TX. A cyclist, a homebrewer, and a bow-tie-wearer, Ivan lives in Sacramento with his spouse, Susan, and their two children who love to swim more than they love Jesus—almost.