Nature and nurture: the story of Central Presbytery of Colombia

Editor’s note: This is the first in a series of three stories about the work of the Presbyterian Church of Colombia (IPC) and the ways in which the PC(USA), particularly Presbyterian World Mission, partners with IPC in that work. This story concentrates on the Central Presbytery, which is headquartered in Bogotá.

Over 160 years ago, Presbyterians established their first churches in Colombia. All these years later, the Presbyterian Church of Colombia is still doing important and impactful work.

Presbyterian Foundation leaders recently visited Colombia to better understand the country, its history of violence and conflict, and what support is needed today as the PC(USA) continues to work with this valued partner in God’s mission. The IPC has three Presbyteries, and the Foundation visited each. 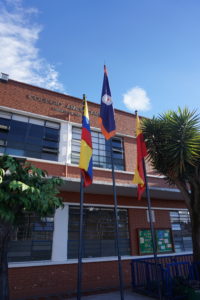 Presbyterian World Mission has two mission co-workers serving in Colombia, both living in Barranquilla on Colombia’s northern coast: Rev. Sarah Henken, who is engaged in peace and reconciliation work with the IPC, and Rev. Dr. César Carhuachín, who teaches at the Reformed University. Sarah also coordinates the Colombia site of the Young Adult Volunteer program. Two new YAVs arrived in Colombia at the end of August to begin a year of service with ministries of the IPC.

Dennis Smith, World Mission’s regional liaison for South America, traveled with the group and served as an interpreter throughout the trip, bringing both language clarity and Colombian context to the visits. Both Dennis Smith and Maribel Pérez, his wife, are PC(USA) mission co-workers based in Argentina.

“Central Presbytery’s current leaders are dedicated and visionary stewards of the Presbyterian legacy in Colombia,” Henken says. “The Colegio Americano of Bogotá and other ministries of the presbytery will continue to nurture new generations to be engaged citizens, creating a brighter future for Colombia and the world.”

Central Presbytery (which includes Bogotá) largely focuses its work for peace and reconciliation on children and teens. The Presbytery operates a school with 2,300 students in Bogotá called Colegio Americano. The school serves students from preschool through high school. That school just celebrated its 150th birthday.

While the school itself is Presbyterian, most of those who attend are not, says Rev. Dayro Aranzalez, Executive Secretary for the Central Presbytery. For generations, this school has provided a model of pluralism and academic excellence to Colombian society. Today, students tend to be either Catholic or members of one of the non-denominational churches in Bogotá. However, Presbyterian values are taught and modeled at the school, focusing on academic excellence and promoting the values of peace, reconciliation and environmental stewardship.

“We have felt God’s presence in this work,” says Rev. Martha Muñoz, Chaplain at the Presbyterian school which just celebrated its 150th birthday. (Read more about the school here.)

Environmental stewardship is important at Colegio Americano, Aranzalez says. Recently installed solar panels at the school have reduced energy costs. The Presbyterian Foundation paid for an energy audit of the campus, performed by Colby May of LIT Consulting. May is still working with the Presbytery and school on implementation. 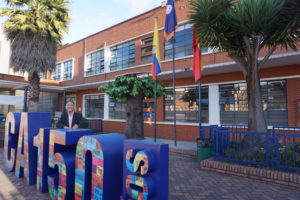 The Center started in 2002 to offer spiritual formation, physical health, cognitive development and socio-emotional development. Center representatives, including youth who are alumni of the program, visit the home of each family to see if any assistance is needed and to ensure that parents understand the nature of the programs and support the good work the youth are doing at the Center.

Former participant Linda Alvarez attended programs at the Center for nine years. “It’s no secret that the kids and the youth at the center live surrounded by big problems like drug addiction, gang activity and prostitution,” she says in a video about the Center. “The New Life Center has been the place that has helped us get out of these problems. If it weren’t for the New Life Center, at this time in my life I might be a Mom of three kids to take care of or I might be involved in drugs and prostitution.”

Miracle on a mountaintop

Two hours outside of Bogotá on a panoramic mountain top, Central Presbytery has a camp site designed to help urban youth in Bogotá connect with nature and experience peace. This has been an active pursuit for the Presbytery for several years.

The Presbytery had once owned a ranch, with the dream of turning it into a church camp, but prior leadership sold it. Current leaders were left hunting for another spot to connect children and teens with nature, says Rev. Javier Rodríguez, Moderator of the Central Presbytery. He lives at the camp. 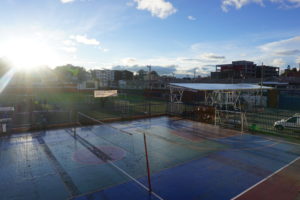 He looked for months, passing up land that was too expensive or had buildings on it that would need to be demolished. Finally, they found a piece of property that the owner needed to sell quickly and so accepted payment of well below market value.

And a camp was born.

“We were seeking to transform the lives of the kids,” Muñoz says. “We wanted them to see what it was like to be part of the natural environment.”

To that end, solar panels help save energy costs and reduce labor. Solar energy is used to run an electric fence to keep animals from roaming and to operate an aeration system for a fish pond that cultivates fresh fish for consumption.

The camp is all organic, and functions both as a laboratory for students and as a model for the surrounding farms. Many of the youth have never seen a dark night sky; a telescope helps them get a better view of the universe than they’ve likely had anywhere else.

A challenging obstacle course designed for teams invites youth to work together, teaching leadership and team-building skills. “They are covered in mud from head to toe when they’re done, and they love it,” Rodríguez says.

It’s obviously one of his proudest achievements – and one he knows makes a difference in the lives of the children and youth who visit.

Rodríguez smiles, appreciatively, soaking in the sunshine and pausing for a moment. “If I were to describe this place in a couple of words, I’d describe it as a miracle,” Rodríguez says.

Robyn Davis Sekula is Vice President of Communications and Marketing at the Presbyterian Foundation. You may reach her at (502) 569-5101 or robyn.sekula@presbyterianfoundation.org.