Growing up in the panhandle of West Texas, a stark, lonely, and beautiful, in its own way, landscape, my life was enriched immeasurably by the tender loving care shown to me by my Grandmother Hester. She was president of the Women of the Church – precursor to Presbyterian Women in the South – in the then El Paso Presbytery, and her many friends in the church also took me under their wings and treated me as their own. They often invited me to sit quietly during their meetings and Bible studies. In addition, I had the privilege to meet their sponsored missionaries as they visited our area, often staying overnight in my grandparents’ home. I was inspired by the stories of wells being dug, clinics and schools being built, children being taught to read and write, and most importantly, people of all ages being told the good news – that God loves us and sent his Son to reveal that love. In my 10-year-old heart there was no more-worthy calling than that of mission worker, a belief I continue to hold today.

The mission field has changed. The challenges are greater than ever, and resources stretched thin. Fortunately, Presbyterian Women – and men – have continued to respond to the increasingly complex needs. In addition to identifying critical areas of concern, such as human trafficking, and educating us as to how to identify traffickers, they support mission workers, host them when they itinerate, participate in mission trips, and give to local, national and world mission.

The Presbyterian Foundation brings people and mission together, by offering a menu of giving options ranging from online giving at the Presbyterian Mission Exchange to donating to an existing or newly established Permanent Endowment Fund.

A year or so ago I was blessed to assist in establishing a permanent endowment fund in honor and memory of two Presbyterian missionaries – Samuel and Lydia Martin – by their great-granddaughter, her mother, and a group of her siblings and cousins. The Martins were missionaries to the Punjab region of India (now Pakistan) after the Civil War. They established two schools that continue today to educate and teach peace and tolerance among Christians and Muslims. The Samuel and Lydia Martin Fund provides school scholarships for children, girls especially, who would not otherwise be able to attend in this extremely poor region of the country. Donations to the fund flow to the schools through Friends of the Presbyterian Education Board of Pakistan (PEB). Learn more about the Friends of PEB from Veeda Javaid at our website, and view the many mission-giving options at the Exchange.

If there’s a mission you feel passionate about, contact your Ministry Relations Officer to explore ways to translate your passion into action. The generosity of individual Presbyterians can change the world, one gift at a time. 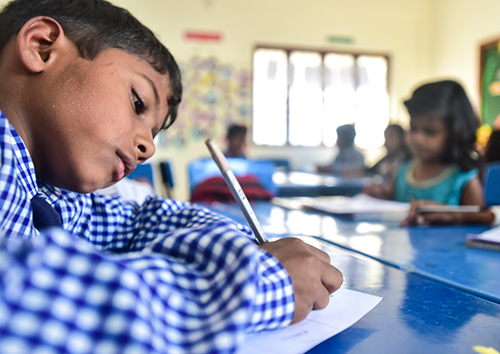 Dr. Samuel Martin and his family left the United States for a missionary assignment in India in 1866. Two generations of Martins served in the Punjab area, helping to grow a Christian community there which is still vibrant and active today. Martin, and his wife Lydia, established a school for boys and another one for girls in the town now called Martinpur (named so in their honor), which is now part of modern-day Pakistan.

A few years ago, Dr. Judith Kleinman, one of the Martins’ great-grandchildren and a retired psychiatrist visited with her mother and attended St. Andrew Presbyterian Church in Boulder, Colo. There she heard how Presbyterian schools in Pakistan, which had been nationalized in 1972, had been returned to the Presbyterian Church of Pakistan in 1998, and were today offering quality education and teaching peace and tolerance to children in the region, both Christian and Muslim, regardless of their ability to pay. She then contacted Sherry Kenney, the Presbyterian Foundation’s Ministry Relations Officer in Denver.

The role of the Ministry Relations Officer (MRO) is multi-faceted and dynamic. Although the MROs perform duties that are somewhat standardized – the Culture of Generosity presentation, for example – each of their churches, committees, and donors is different. When they work with an individual donor in structuring a gift to the Foundation to support an important ministry or mission, they explore all the possibilities and ways to leave a legacy gift.

In this instance, Kleinman drew a family tree for Kenney and shared stories about her grandparents. Kenney contacted the Presbyterian Historical Society and provided Kleinman with archived articles about Samuel and Lydia. According to one of the articles, Dr. Martin served in India until his death in 1910 and was buried there. Over the course of his ministry, he taught generations of Indian families, and baptized an estimated 15,000 new believers in the Christian faith.

After meeting with the family, the obvious solution to the family’s goal was a permanent endowment fund with the Presbyterian Foundation, subsequently named the “Samuel and Lydia Martin Memorial Fund. The fund was established June 11, 2014, to receive current gifts and future bequests “for scholarships for the Presbyterian Education Board schools in Martinpur, Pakistan.”


It’s so amazing how God is at work. The Martin family, after 100 years living back in the United States, are joining together, supporting the educational work, and creating an endowment with the Presbyterian Foundation,” Javaid said. “It’s amazing. I am so thankful.”
She described the gifts of the Martin family as “seed money” which she hopes will grow over time as alumni of the schools and members of many other churches follow this model of providing support for the schools.

This opportunity to help make a generous donor’s vision a reality is one of the greatest joys for the Ministry Relations Officers at the Foundation. Let us know how we can help you preserve your passion for mission. Call us at 800-858-6127, option 3 and we’ll put you in touch.

Expressing Faith and Gratitude Through Giving

The Presbyterian Foundation has over two centuries of expertise in enabling Presbyterians to express their faith through their generosity. Throughout its history, the Foundation has encouraged giving for the benefit of others in the example of Christ and in responsible stewardship of all God’s gifts. To discuss gift plans that might be best suited for your situation, call your Presbyterian Foundation Ministry Relations Officer (MRO). Find your MRO using your zip code at www.PresbyterianFoundation.org or call us at 800-858-6127 and we’ll put you in touch.