He was ordained to the position by the Presbytery of Lake Michigan on November 1, 2020. 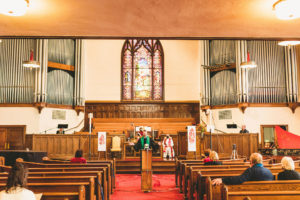 The Foundation’s team of Ministry Relations Officers help congregations and ministries create a culture of generosity, offering seminars and workshops, developing gifts and fundraising plans for ministries, and providing coaching to finance, stewardship, and endowment committees.

Kyle had served as an Associate Ministry Relations Officer for about a year prior to being ordained into this position.

Stephen Keizer, Vice President of Ministry Relations for the Foundation, says it was readily apparent to anyone who worked with Kyle that he was called to serving as a Ministry Relations Officer. “Kyle clearly has a real heart for the work that the Foundation does,” Stephen says. “Having served in church ministry himself, he understands the challenges and the joys of church leadership. His hallmark is his passion for the work of guiding congregations in stewardship and other financial matters. We’re so glad he was called into this ministry and thankful that the Presbytery of Lake Michigan ordained him into this role.”

When Kyle attended Emory University’s Candler School of Theology in Atlanta, Georgia, he was not a Presbyterian. The opportunity to be around a number of “cradle” Presbyterians led him to feel at home amongst them.

Upon graduating from Candler, Kyle headed to Germany for a year to discern next steps and to see if his thoughts of pursuing a Ph.D. might take shape. “Over the course of that year, I realized I didn’t want to pursue the academic realm right away as it felt like it was getting me disconnected from the church,” Kyle said.

So, when he returned to the United States, Kyle found a youth ministry position at Westminster Presbyterian Church, Grand Rapids, in his home state of Michigan. It was during this time that he realized he wanted to enter the ordination process and became an Inquirer.

“During my time as an Inquirer a lot happened,” Kyle says. “I met my wife, got married, walked alongside friends going through tragedies, and moved from youth ministry to adult formation and mission.” These changes in life delayed the ordination process somewhat, but the process also gave him a richer education in what ministry is like in the ups and downs of life.

“The idea of stewardship was not even on my radar at that point,” Kyle says. “My ministry thus far had been in faith formation and mission — and I didn’t know how to think about those in relationship to financial stewardship.” 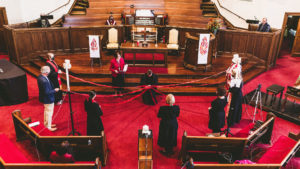 But over time, this understanding started to shift. “I began to realize that churches can actually be held back by not paying attention to the whole person, by leaving the financial out of the faith conversation, and by just crossing our fingers that we will have enough money even though we never talk about it,” Kyle says.

“Faith formation concerns the whole person — our whole lives,” Kyle says. “If we are not willing to talk about everything, then we are not taking God seriously.”

The culmination of this journey of discernment came in a rather unexpected form as well — an examination before his presbytery in September. “I was asked two questions, the doxology was sung, and a livestream ordination service was planned for November 1,” Kyle says.

The service, under pandemic related unusual circumstances, did require some creativity. Only close family and members of the Administrative Commission were actually present. At the close of the service instead of the traditional laying on of hands, a red ribbon was used to allow for appropriate distancing, while still maintaining a connection.

Ordination to the Foundation

As the first person to be ordained as a Ministry Relations Officer, Kyle was asked during his examination why the position warranted ordination. It is a question to which he’s given a lot of thought.

“It is important to think about the things that we often neglect when it comes to discipleship —and our money is at the center of that,” Kyle says. “It is one of the things that often churches feel uncomfortable talking about, but where our treasure is, there we find our heart.”

Kyle now sees stewardship as at the heart of faith formation. “I think we need to continually ask ourselves how we shape our desires so that they come into line for what God wants for us and for creation,” he said. 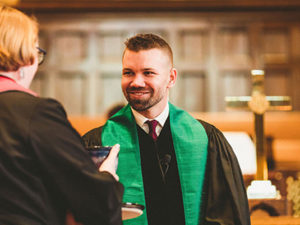 In today’s world of social media dominance, Kyle has also begun to ask how we are spending our attention.

“What we are beginning to see especially with social media is that we are the product – how we spend our attention is the product,” Kyle says. “But I wonder, how can we use our attention with intention?” Where our treasure is, there our heart will be found. “So, where are we investing our attention?”

It is tempting for the church to try to be another attention-getter — by being flashy, interesting, relevant (or another appropriate buzzword of the moment). There can be a fear of losing people’s attention that leads to a tendency of distraction. That struggle, with the move to online formats of worship due to the ongoing pandemic, is perhaps more real now than ever.

“But stewardship is about delaying self-gratification for the deeper and more profound thing we are created for,” Kyle says. “We are stewarding our time and attention, being formed through worship, offering ourselves throughout the week, and investing and participating in what God is doing in the world.”

Hope for the future of the church

“We often hear talk about the church being in decline, but I’m not sure that is an appropriate theological description,” Kyle says. Perhaps numerically it may be true. “But God is obviously doing some new things with the church, and we don’t know what is on the other side of those.”

For Kyle, his work with the Foundation is a way to support and invest in churches while walking alongside them to see what God is doing in the church and in the world.

“We get to be the trustees of this gift that God has given us during the transformation of the church,” Kyle says. “It is inspiring and overwhelming. And it is a gift.” 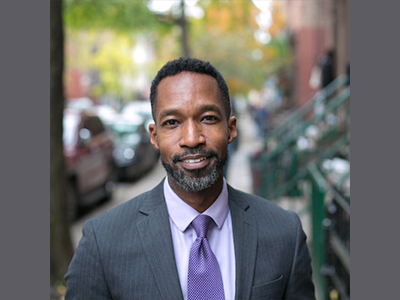 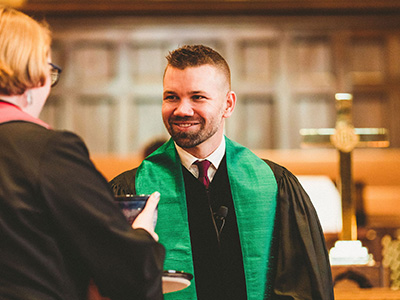 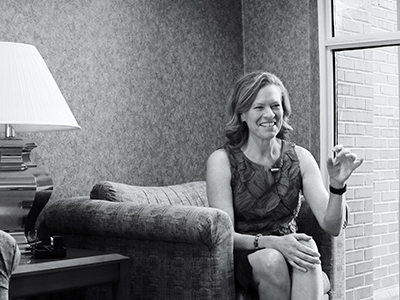 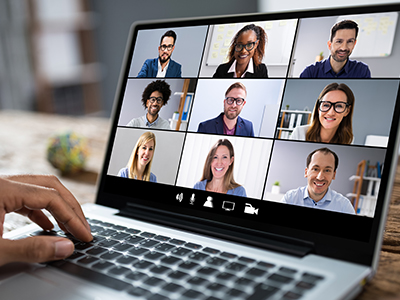