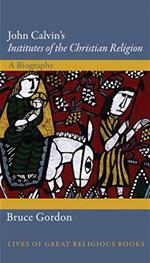 Princeton University Press is publishing an imaginative series: “Lives of Great Religious Books.” Each book in the series is a “biography,” not of the author, but of the book itself. Once published, books take on a life of their own, no longer the private possession of the author. The novelist Paul Auster notes:

“A book is a mysterious object, I said, and once it floats out into the world, anything can happen. All kinds of mischief can be caused, and there’s not a darned thing you can do about it. For better or worse, it’s completely out of your control.”

John Calvin wrote, revised, revised again, and published editions of the Institutes of the Christian Religion in Latin and French for more than 20 years. Nearly 450 years have passed since the final, Latin edition of 1559. Bruce Gordon traces the book’s long gestation period and its many years of influence, neglect, misuse, and revival, none of which Calvin himself could predict, fear, hope for, or in any way control. His Institutes took on a life of its own.

And yet, as Gordon writes:

“Posterity for Calvin and his book has been complicated in light of their curious, often strained relationship. Unflattering caricatures of the reformer endure in our day, often with little reference to the Institutes. Calvin and his Institutes have been regarded as one and the same, in a symbiotic relationship, with the book, whether read or not, the manifestation of the man.”

Recent biographies of John Calvin, including one by Bruce Gordon, have done much to dispel unflattering caricatures. Gordon’s biography of Calvin’s book may serve to introduce the Institutes to this generation, including Presbyterian pastors who have not read it because they imagine they already know what it says.

An important feature of Gordon’s biography of the Institutes is his awareness throughout that Calvin’s book has never lived alone, but belongs to the wider tradition of Reformed theology. Gordon treats the life of the book within the life of the tradition. Presbyterian pastors who have ignored the Institutes are only dimly aware of its continuing influence in shaping and re-shaping the contemporary church’s faith and life.

The Princeton University Press “Lives of Great Religious Books” series is superbly produced, employing beautiful cover art and excellent paper. Other book biographies in the series include C.S. Lewis’ Mere Christianity (reviewed in a previous post of The Pastor’s Life”), the Book of Common Prayer, Bonhoeffer’s Letters and Papers from Prison, Augustine’s Confessions, the Book of Genesis, and the Book of Job.