During the Season of Lent, I preached a sermon series based on the epistles assigned in the Revised Common Lectionary. This was a bit of a Lenten discipline for me. Usually, I preach on the assigned gospel readings from the lectionary as we journey with Jesus through his earthly ministry to Jerusalem and the cross. Preaching the epistles during Lent proved to be a challenge. Still, I persevered and discovered some encouraging and hopeful words and ideas that resonated with me and gave me the energy to press on.

On the first Sunday of Lent, the lectionary provided Romans 10:8b-13, which starts, “The word is near you, on your lips and in your heart.” More than anything, this verse gave me reassurance that even when I'm not feeling close to God, or I'm feeling disconnected from my faith, the word is still near me and in my heart. The last two years have often created a sense of disconnect between God and me. Some of that stems from the chaos of COVID-19 precautions and the many ways that we have attempted to worship and gather as a family of faith. This assurance that the word is still near, on my lips and in my heart, brought me a sense of peace. The closing passage in this assigned epistle reminds us, “Everyone who calls on the name of the Lord shall be saved.” Sometimes my calling on the Lord has come in exasperated frustration and sometimes in silence, but even in those moments, I am reassured of my identity and salvation in Christ.

On the second Sunday of Lent, we read Philippians 3:17-4:1, which opens with, “Brothers and sisters, join in imitating me, and observe those who live according to the example you have in us.” This passage invited me to reflect on those who have mentored me in my faith over the years. Who have I sought to imitate and observe? This passage happened to fall on a week where I presided over two funerals, one of a local church member and one of a mentor of mine from the church where I grew up. It was incredibly cathartic to reflect on the life and witness of the people who have discipled me, and I encourage others to do the same if they are feeling drained. The communion of saints surrounds and upholds us. Stopping to reflect on those who have supported us along the way can provide us with new and renewed energy when we need it. 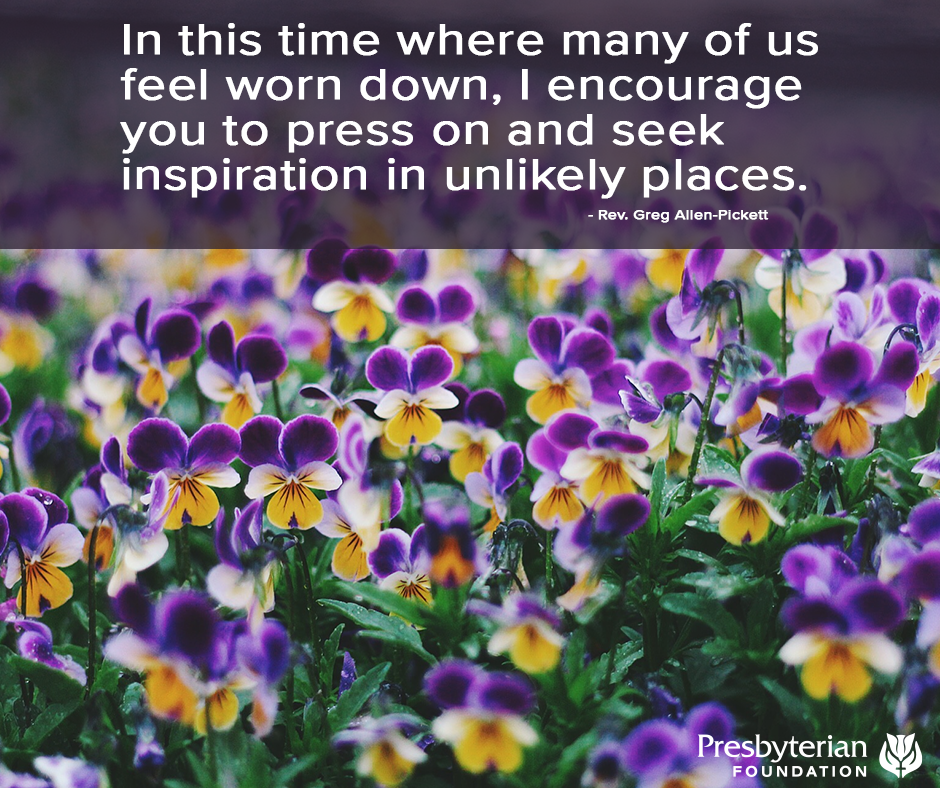 On the third Sunday of Lent, I felt more admonished than uplifted by the epistle in the lectionary, but sometimes I need that kind of reorientation when I am stuck in a spiral of negativity. 1 Corinthians 10:1-13 walks us through the story of all the ways the Israelites misbehaved during their wilderness wanderings. Paul writes, “Do not complain as some of them did and were destroyed by the destroyer. These things happened to them to serve as an example, and they were written down to instruct us.” This passage caused me to pause and reflect on some of the patterns of negativity and complaining that I have fallen into over the past two years. It is easy to focus on the negative, and I think it is human nature. However, Paul's words to the Corinthians remind us to learn from the mistakes of our spiritual ancestors. Any criticism we utter aloud must be constructive and let us always remember to speak the truth in love.

On the fourth Sunday of Lent, we find Paul's robust call to reconciliation in 2 Corinthians 5:16-21. We are reminded that we have been reconciled to God, and God has given us the ministry of reconciliation, “So we are ambassadors for Christ.” Reading this passage caused me to stop and reflect on relationships in my life that have fallen into disrepair, particularly in the last two years, and how I am called to work to reconcile those relationships. This passage opened up space for me to reach out and seek to renew relationships I had neglected. It also reminded me that God calls a whole lot of imperfect people to be ambassadors for Christ, including Paul himself. If God can turn Paul into one of the most effective ambassadors for Christ in the history of the church, there must be hope for me too.

On the fifth Sunday in Lent, I encountered Paul's reminder to “press on” in Philippians 3:4b-14. All of us have persevered through a lot over the past two years, but reflecting on Paul's words and his own journey helped me to put it into perspective. Paul was nearly stoned to death at Lystra, he was imprisoned in Philippi, he had to flee Thessalonica because his life was threatened, and he was shipwrecked multiple times. Then Paul was arrested in the temple in Jerusalem and imprisoned again, and he was also imprisoned in Rome, twice! Throughout all of these trials, Paul maintained a sense of joy and a sense of affection for the people he was serving, just read the introduction and conclusion of most of his epistles. The joy that he exuded and the love he had for his community were grounded in the sure and certain knowledge of his identity in Christ and the power of the resurrection. Paul writes, “I press on to make it my own because Christ Jesus has made me his own.” This reminder that we have been claimed by Jesus Christ can give us what we need to persevere.

The discipline of preaching through the epistles during the Season of Lent provided me with motivation, perspective, and a renewed sense of calling. It reminded me of my identity as a follower of Jesus and an ambassador for Christ. It encouraged me to reflect on mentors who have discipled me over the years. And it gave me the energy to persevere. In this time where many of us feel worn down, I encourage you to press on and seek inspiration in unlikely places. Sometimes even the less frequently read passages in the Revised Common Lectionary can provide us a bit of insight and joy as we seek to proclaim our hope as resurrection people.