Choosing the right version of the Bible

For centuries, American Protestants read the Authorized Version of the Bible (better known as the King James Version). In the mid-twentieth century a revision of the KJV appeared: The Revised Standard Version. The RSV changed Elizabethan language to contemporary English and made use of better Greek manuscripts. The RSV was itself revised 40 years later as The New Revised Standard Version – NRSV. But, in addition to KJV, RSV, and NRSV, we now have the NIV, TNIV, ESV, NEB, REB, TEV, CEB, JB, NJB, NKJV, and more, in addition to paraphrases such as J.B. Phillips, the Living Bible, and The Message. 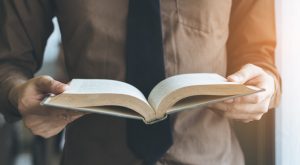 How are pastors and members to choose which translation to read and study? A Presbyterian Panel survey showed that most pastors use either the NRSV or the NIV, but why? For many, it is either default to denominational preference, presumed theological compatibility, or personal taste. All reasons for choice take little or no account of the fact that every translation from one language into another is, of necessity, an interpretation.

Most translations are the product of a committee of scholars. (For a fascinating and illuminating insight into the process that produced the KJV, read God’s Secretaries: The Making of the King James Bible.) Orthodox scholar David Bentley Hart has recently produced his own translation of the New Testament (Yale University Press). In his introduction he notes that, “almost all modern translations of the text have been produced not by single scholars … but by committees. The inevitable consequence of this is that many of the most important decisions are negotiated accommodations, achieved by general agreement, and favoring only those solutions that prove the least offensive to everyone involved.” Ah, but who is involved, and how are we to decide which committee’s word to take? Or which single paraphraser or translator to rely on?

Personal preference seems a poor way to deal with what we affirm is the word of God. Presbyterian ministers are required to study Greek and Hebrew (not necessarily to learn either one). But even a brief introduction to the languages provides an awareness of how the languages work, and gives access to lexicons and grammars. Few ministers, myself included, are able to read Greek or Hebrew with ease. But we are all equipped to examine key issues. This is particularly important when dealing with key texts.

It makes a difference.