My first memory of tithing is from first grade. My Dad had just completed seminary and was in his first call serving as the Associate Pastor of First Presbyterian Church in Selma, AL. My Mom wanted to sing in the choir and so the Senior Pastor’s wife, Mrs. Bette Waters, offered to sit with me during worship so my Mom could participate in the choir.

On that first Sunday as the service was beginning, Mrs. Waters leaned over and told me if I behaved she would give me $2 and that I could put $1 in the offering plate and then I could keep the other $1. As a first grader, I had no concept of money except that if someone was giving it to you then you should say thank you.

This happened for several weeks until one Sunday after worship as my family was walking to the car in the parking lot my Dad asked if I was enjoying sitting with Mrs. Waters. I expressed delight and shared that she gave me money each week. My Dad explained to me that even though that was a nice gesture by Mrs. Waters, I shouldn’t be taking money from her for behaving in church and he asked me to give the few dollars I had collected over the several weeks back to her which I of course did.

As I grew older, I learned that despite my experience of tithing 50% and 100%, that most people talk about tithing 10% of their income. Now as a Ministry Relations Officer, I lead workshops on stewardship and tithing and what I learned as a kid certainly influences my perspective on these issues. 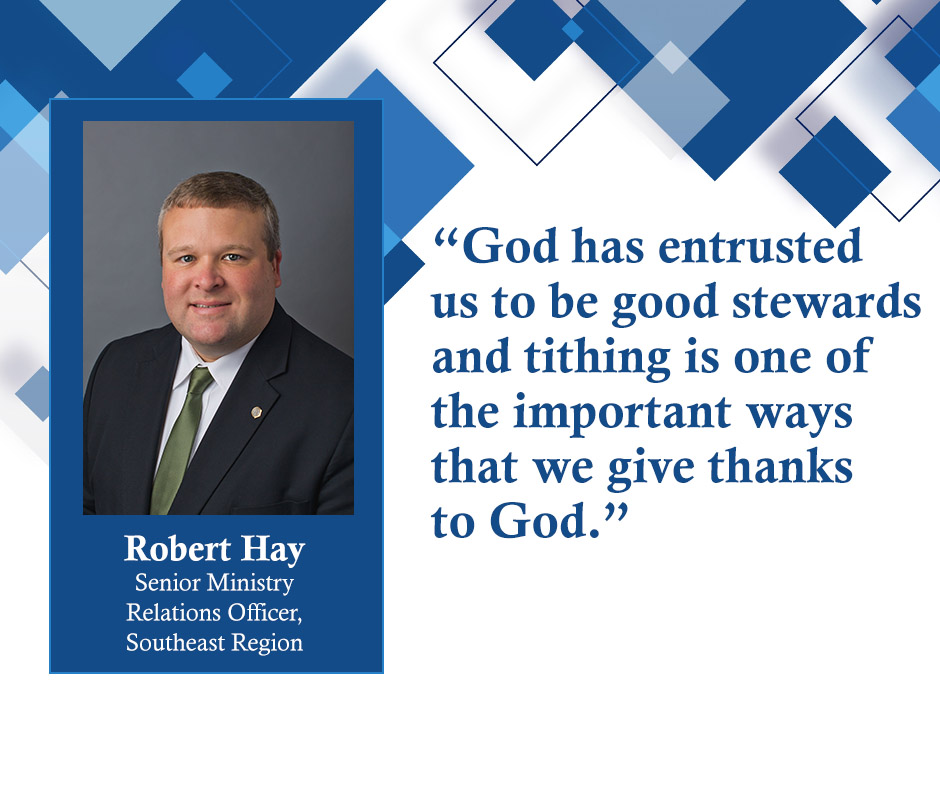 A few years ago, I had an interesting disagreement with someone who attended one of my stewardship workshops. During the workshop, I spoke about tithing 10%. After the workshop, she pulled me aside and began to challenge me on the tithe. She said the tithe was not a helpful tool for calculating how much to give because as a newly retired person she didn’t have income. She explained that she was drawing social security but that the majority of her money was in IRAs and that she would draw money from those as she needed the money. And since she wouldn’t have a regular income check that she couldn’t tithe. She wanted me to confirm her logic so that she could feel ok not tithing. I wasn’t going to let her off the hook that easy.

I asked her how she would know when to draw money from her IRAs and she said that she had recurring living expenses that her social security income wouldn’t cover so she would draw money each month to help with those expenses. I pointed out that she knew with some level of certainty how much money she was going to spend a year so she could use that number and apply 10% to that number and then increase her monthly draw from her IRAs to be enough to cover her monthly expenses plus 10% to give to the church. She was confused by what I thought was simple math. Then she argued with me that would mean she would be tithing based on expenses and not on income. The tithe is about income, she said, and the only income she had was social security and that wasn’t enough to cover her expenses so she couldn’t afford to tithe.

You know when you are having one of those conversations where you finally realize you are wasting your breath. I simply said to her that I disagreed with her philosophy and that I believe that we give not out of a legalistic computation but that we give because we are stewards of these assets. That these assets don’t belong to us; God entrusted us to be stewards. We should give and give cheerfully back to God what isn’t ours in the first place.

And that is when she realized that she was not going to be let off the hook by me and she clinched her teeth and said she disagreed but that she appreciated most of my workshop. And as she walked away it dawned on me that the philosophical chasm between us was that I believe that everything that I have is not mine, but it is God’s. And I think she believed everything she had saved in her IRAs was hers.

But the most often asked question I receive about the tithe is, is the tithe 10% pre-tax or 10% post-tax? In my experience, the motivation of that question is the asker wants to know exactly the amount they have to give to get into heaven. That is not my theological understanding of how heaven works, so I typically respond that the 10% tithe is a model that can be helpful to the discipline of giving.

Further, I subscribe to the belief that every church has plenty of money; it’s just still in its members pockets. So, I typically answer the pre-tax/post-tax question by saying, if everyone gave 10% post-tax then the church would have plenty of money. Because what I know is that the average percentage given is closer to 2% and the most popular gift in the church is $1,200, or $100/month. If $1,200 represents a tithe of 10% then that equates to annual income of $12,000. And whether that is pre-tax or post-tax doesn’t really compute in my Presbyterian context made up primarily of middle class and upper-middle class church members.

So, what is a tithe? Well, I learned a very important lesson from my parents about stewardship. The most important thing they taught me about stewardship was that everything we have has been given to us by God. My parents raised me and my brother to understand this concept in every aspect of our lives. It was in the way they talked to us about our own gifts and talents and it was in the way they used their God-given time, talent, and treasure. They instilled this in me, and it is core to who I am as a child of God.

Yes, percentage-based giving is a wonderful tool. My wife and I give 10% to our church. But what I believe is more important is understanding that everything we have was given to us by God. God has entrusted us to be good stewards and tithing is one of the important ways that we give thanks to God. It is not meant to be a legalistic computation. It should be a joy to give, not a chore. For God loves a cheerful giver!