“’Destroy this temple, and in three days I will raise it up.’ …he was speaking of the temple of his body. After he was raised from the dead, his disciples remembered that he had said this….” (John 2:19, 21-22)

“Just as Moses lifted up the serpent in the wilderness, so must the Son of Man be lifted up, that whoever believes in him may have eternal life.” (John 3:14-15)

“Very truly, I tell you, unless a grain of wheat falls into the earth and dies, it remains just a single grain; but if it dies, it bears much fruit. Those who love their life lose it, and those who hate their life in this world will keep it for eternal life. Whoever serves me must follow me, and where I am, there will my servant be also.” (John 12:24-26)

“though he was in the form of God, [he] did not count equality with God as something to be exploited, but emptied himself….” (Phil. 2:6-7)

This year the heart of Lent falls in March, and the lectionary readings invite us to contemplate the mystery of God’s self-giving and the meaning of sacrifice. Every religion has its particular and peculiar insight into the holy. At the heart of the Christian insight are the incarnation and the cross. Both the birth and death of Jesus reveal the giving of God’s own self to us, to the world. Jesus’ life and ministry, and especially his suffering and death demonstrate the full measure of God’s generous self-giving. This is what we encounter as we read the scriptures. It is what we experience each time we come to the Lord’s Table – the life of God poured out and broken for us.

God’s self-giving is intended to spark a similar response in us. My favorite hymn of this season (“When I Survey the Wondrous Cross”) sums it up like this: “Love so amazing, so divine, demands my soul, my life, my all.” Or as Paul writes to his friends in Philippi, they are to have the same “mindset” or orientation toward one another that Christ had: that he emptied himself and took the form of a servant to show God’s compassion and love for all.

Self-giving is often equated with sacrifice. Certainly those who serve in the armed forces, even if they do not make the ultimate sacrifice of their lives, are sacrificing their time and energy for the rest of us and for the greater good. But even before sacrifice is an act of heroism, sacrifice as self-giving begins with a thousand actions that are at the core of our everyday experience. 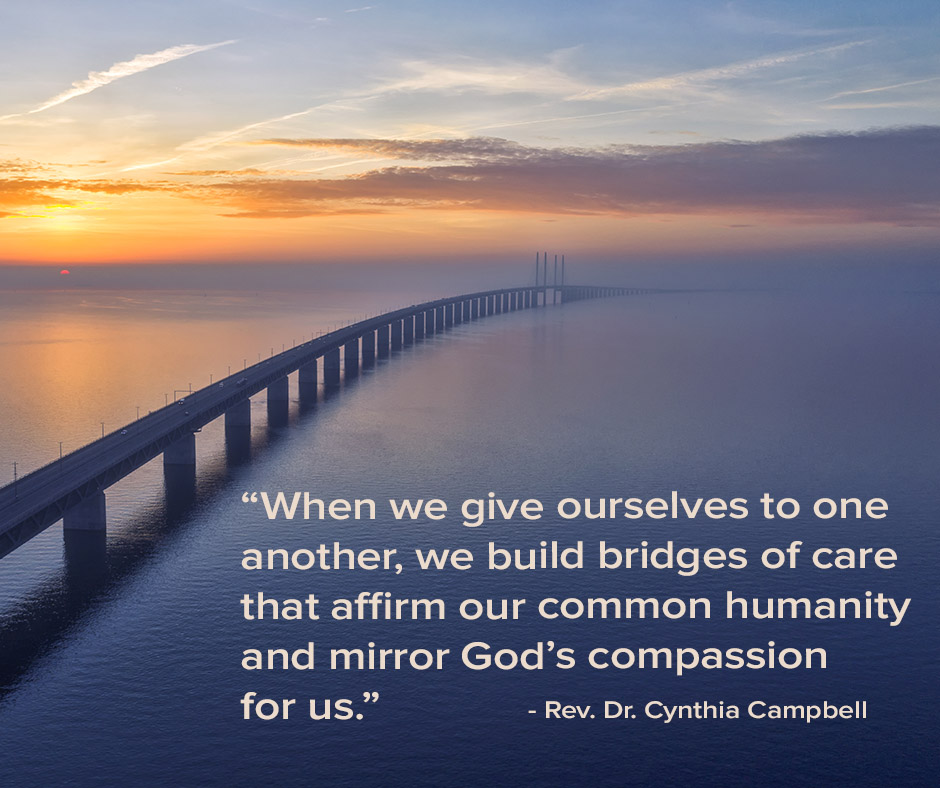 When I prepare a meal for my husband or when he makes the bed, we extend ourselves to each other in gestures of care. Teaching a class or tutoring a child; sending a card or text to a friend or neighbor; thanking a store clerk or restaurant server; even greeting a passer-by on the street: all are gestures through which we extend ourselves to others in ways that acknowledge their dignity and worth. When we give ourselves to one another, we build bridges of care that affirm our common humanity and mirror God’s compassion for us.

This month will mark the one-year milestone in our nation’s struggle with COVID-19. Over the course of this year, millions have become ill, hundreds of thousands have died, and almost all of us have had our lives disrupted, some in life-changing ways. Along the way, we have been asked to make sacrifices. Some sacrifices were small: wearing a face mask and “social distancing.” Other sacrifices were both hard and costly: foregoing in-person worship and going to school; working from home; businesses shuttered temporarily, some even permanently. The losses we have experienced are real, and the effects will be long-lasting. As we begin to emerge from this crisis, we would do well to look back and ask if we did enough to help stem the tide. But this will not be the last such crisis that we face. At some future time, we will likely be called upon to sacrifice – to give of ourselves for the sake of others, to extend ourselves for others in actions of compassion and gestures of care.

Lent is a season in which we are invited to reflect on the mystery of Christ’s sacrifice as the preeminent example of God’s self-giving. In these days, we are invited as well to practice self-giving in our everyday lives and so to participate in God’s way of being in the world. Each gesture draws us closer to the heart of God.

Cynthia Campbell recently retired as pastor and head of staff at Highland Presbyterian Church in Louisville, Ky. Cynthia began her ministry in Texas and served in three congregations before completing her Ph.D. She joined the faculty of Austin Presbyterian Theological Seminary in 1981 where she taught theology and ministry and directed the Doctor of Ministry Program. In 1988, she was called to the First Presbyterian Church of Salina, Kansas, as Pastor/Head of Staff, one of the first women to serve a congregation of over 1,000 members as pastor. In 1995, she was named President of McCormick Theological Seminary in Chicago. She is the author of A Multitude of Blessings: A Christian Approach to Religious Diversity (2007) and God’s Abundant Table (2011). Cynthia is married to Fred Holper, who is retired from teaching preaching and worship at McCormick Seminary. They have two adult children who live in Milwaukee.