“Friends in Christ” is a powerful phrase, isn’t it? Many of you that read Stewardship News do not know me, but I am confident to address you as friends because we are one in Christ. We will differ on politics, theology, ability to give, social and cultural customs, but we remain friends because our friendship is not about you or me, but through Christ who loves us. Powerful!

This e-news issue deals with “giving because you can.” We give because Christ first loved us, not because we are good, moral, better-than-others, or even more able to give. In fact, we give to causes and people we do not know and who will never know us because in Christ we are one. We give sacrificially, a little or a lot, because Christ first loved us enough to give us everything. Those of us who get the privilege of visiting different individuals, churches and presbyteries in many vast regions of our country can attest to people’s amazing generosity primarily because we are giving to friends in Christ. Powerful!

Those of us working for the Presbyterian Foundation know you give generously through annual pledges and special offerings, but perhaps you’ve not considered giving through a legacy gift. Our ministry is to remind and help you to leave a generous legacy gift to those same causes you care about. A legacy gift of a charitable remainder trust can mean your passion and generosity will live on forever.

A charitable lead trust can be the kick start that a church or agency needs to grow their mission and make a stronger witness to Jesus Christ. We remain ready to discuss these options and more, seeking only to advance the mission and grow the church. Powerful!I write this article on my 35th wedding anniversary. I have been laid up with a back injury for three months and am eager to have corrective surgery. During this forced downtime, my wife, Kathi, has been my nursemaid, cook, cleaner, doctor-appointment-driver, and main gripe receiver. She does this because I am the most adorable man in the world … wait, while that may be sort of true, she does this because we made a sacred trust before God 35 years ago in our wedding vows to love and care for one another in the good times and in the bad, and in sickness and in health. This time has been the harder of those promises, but she has upheld her trust without question as many of your spouses have as well. Powerful!

A legacy trust for the future of Christ’s Church is keeping our baptismal promise. We made a sacred trust with God to live in the Christian faith and to love God, neighbor and self forever. We promised our whole selves – time, talent, and treasure – forever! This is the year for each of us to take a good look at our estate plans and make sure we stay true to our vows. Powerful!

Bruce Jenkins has been a member at Calvary Presbyterian Church, in Indiana, Pennsylvania, since 1959, which is well over half his 82 years. Employed as a trust officer during his career at a local bank, Jenkins has been involved with the finances of the congregation, including helping to manage the endowment, for the past 35 years.

“I’ve always been a church person,” explained Jenkins. As a young man he first attended the Methodist church, followed by the Baptist church and attendance at a Catholic college; and then, upon moving to Indiana, became a Presbyterian.

It’s that mix of ‘church person’ and his career as a trust office that first got Jenkins interested in church endowments.

“When I was working at the bank I could encourage people to consider giving to the church if they had no other place to give their money,” explained Jenkins. “I think I was successful in accomplishing that with a number of people.”

Part of Jenkins’ involvement in the financial aspects of the congregation has been as a record keeper – including a list of each bequest that has been made to the church since 1971.

“It is interesting, when you look back on it, to see whom the bequests came from,” said Jenkins. “It’s not always who you might expect.”

“What is interesting about the gift of $500,000 is that the gentleman who gave it – I think the last time I saw him in church was 1971,” said Jenkins. He had served as an elder, and his work had been as a grocery store manager. “He got so involved in his work at the grocery store that he didn’t attend church, but he was still very faithful in contributing to the church over all those years,” said Jenkins. 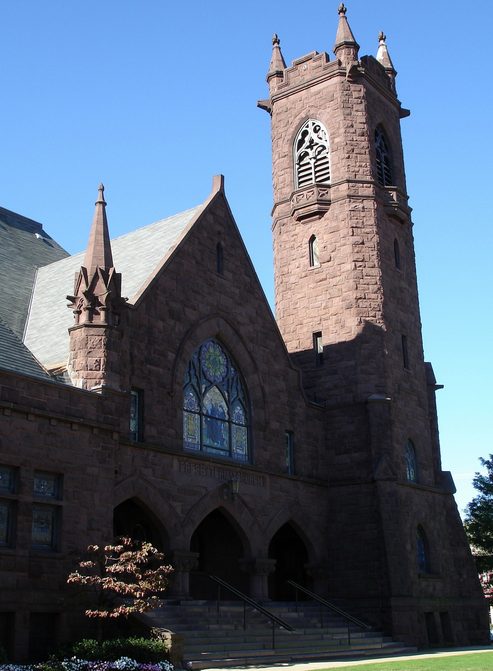 One such need came about five years ago, when the congregation realized that it was time to tear down the aging bell tower and rebuild it. The stone church building was constructed in 1906 – including the bell tower, and the mortar in the stone was beginning to flake off. Not just that, but large chunks began to break off as well, creating a danger to those who might be below. The bell tower, instead of being that which beckoned folks to worship, became a hazard. But repair was not cheap. The cost of the project was estimated to be about $600,000. “We borrowed most of that money, initially, from the endowment, which we then needed to build back up,” explained Jenkins. The recent undesignated $500,000 gift has gone a long way in helping them do precisely that.

Other recent upgrades to the church facility include putting on a new roof and replacing the sanctuary’s large stone steps. Jenkins realizes that these are not ‘glamorous’ projects, but they are essential to the maintenance and upkeep of the church building.

“What the endowment has done for us is to alleviate the stress from having to borrow money from outside sources to make these necessary improvements,” shared Jenkins. “I think it helps the ministry of the church to reduce the concern of ‘Where is the money going to come from to accomplish these things?’” Having the endowment allows the congregation to continue to focus on its mission and ministry, while also being able to keep the facility itself safe and accessible.

“We as a congregation don’t do a lot to cultivate these gifts,” admits Jenkins. They do periodically host seminars, and quarterly ask those who have included the church in their plans to let the session know of such plans. The church’s newsletter often has a reference to the endowment fund – and they make sure to thank contributors.

The other factor that Jenkins sees as essential is the good stewardship of the endowment funds. “I think part of what causes people to give is that we are very open about the use of this money – they know where it goes, what it is used for,” explained Jenkins. “All our funds are invested in the same way – quality, good paying, and reliable blue chip stocks — that pay good dividends,” said Jenkins. “We don’t try to get rich quick – there’s nothing wrong with getting rich slowly.”


Expressing Faith and Gratitude Through Giving

The Presbyterian Foundation has over two centuries of expertise in enabling Presbyterians to affect positive change in the world with their accumulated assets in accordance with their Christian principles and values. Throughout its history, the Foundation has encouraged giving for the benefit of others in the example of Christ and in responsible stewardship of all God’s gifts. To discuss gift plans that might be best suited for your situation, call your Presbyterian Foundation Ministry Relations Officer (MRO). Find your MRO using your zip code at www.PresbyterianFoundation.org or call us at 800-858-6127 and we’ll put you in touch.